This is an old revision of the document!

The physical (PHY) layer transmission technology of IEEE 802.3bz is based on 10GBASE-T, but operates at a lower signaling rate. By reducing the original signal rate to ​1⁄4 or ​1⁄2, the transfer rate drops to 2.5 or 5 Gbit/s, respectively.[4] The spectral bandwidth of the signal is reduced accordingly, lowering the requirements on the cabling, so that 2.5GBASE-T and 5GBASE-T can be deployed at a cable length of 100 m on unshielded Cat 5e and Cat 6 cables, respectively.[5] 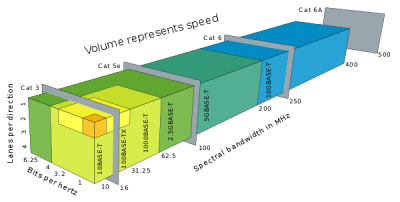 May 2015 was a landmark date for campus networks everywhere because that is when the Aruba 5400R Switch Series became the first switch to deliver multi-gigabit Ethernet technology. The HPE Smart Rate multi-gig modules brought higher speeds and PoE+ using existing wiring, simplifying migration by eliminating the need to rip and replace cabling. No longer are customers faced with the costs and complexity of upgrading wiring to achieve above 1GbE speeds because this innovative technology runs on widely used, existing CAT 5e cabling. Deploying these wired multi-gigabit ports today protects infrastructure investment because they support 1, 2.5, 5 and 10GbE speeds that mean that as new, faster devices such as APs become available, the wired infrastructure is ready to support with the fastest connection. This exciting technology, which brings more performance, simplicity and savings to the wired foundation of campus networks, helps create the foundation for the Aruba Mobile First campus solution. HPE Smart Rate is also available on the Aruba 330 Series APsand Aruba 3810 Switch Series. 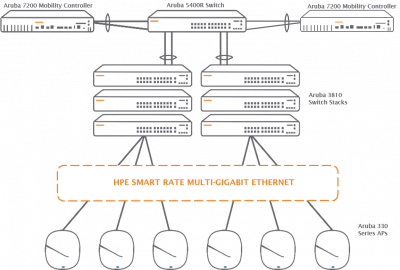 Aruba consistently delivers standards-compliant, rather than proprietary solutions to the marketplace. HPE Smart Rate technology was first to market and is interoperable with the NBASE-T ecosystem of 2.5G and 5G multi-gigabit Ethernet products today. NBASE-T Alliance members have demonstrated the interoperability of 2.5G/5G NBASE-T products such as wireless access points, switches, network interface cards, cabling and test equipment at plug fests and at the NBASE-T Alliance Multi-Vendor Demos at Interop 2016.

The newly ratified IEE 802.3bz 2.5G/5GBASE-T standard is consistent with the NBASE-T technology baseline which provides compatibility between HPE Smart Rate ports and future IEEE 802.3bz ports. The Power over Ethernet on HPE Smart Rate technology is based on IEEE 802.3at PoE+ and provides up to 30 watts (PSE)/25.5watts (PD) to all standards-compliant powered devices.

Learn more about how to take advantage of 802.3ac Wave 2 in this Aruba multi-gigabit Ethernet solution brief.

Sue Gillespie is a senior product marketing manager for campus switching at Aruba, a Hewlett Packard Enterprise company. When Sue is not perfecting her chocolate chip cookie recipe or volunteering at swim meets, she continues to enlighten the world on the advantages of Aruba's switches.